While Americans might not have the slimmest figures or clearest skin in the world, when it comes to straight, whiter-than-white teeth, there is — literally — no country as great as the United States.

Americans take dental hygiene and cosmetic dentistry very seriously. Rotten, yellow or crooked teeth may come to mind when thinking of Britain of France, but America? Not so much. When it comes to mouths, America is the straightest and whitest country on earth. 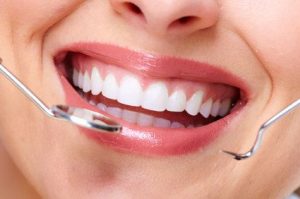 Just ask British Actor and Comedian Ricky Gervais, who played a dentist in the 2008 comedy “Ghost Down.” Though the film was warmly received by critics, Gervais told The Daily Mail that Americans lost their sense of humour when it came to his less-than-perfect teeth (which were not edited or re-touched in the film). Gervais, who has refused cosmetic dental treatments, doesn’t understand why Americans make such a fuss over their pearly whites. “The biggest difference between the Brits and the Americans, they are obsessed with perfect teeth,” he said.

Indeed, tooth whiteness and straightness is deeply embedded in American society and culture. Virtually all Americans, 99.7 percent, believe a smile is an important social asset, according to the American Academy of Cosmetic Dentistry.

In an increasingly polarized country, getting near-unanimous agreement on anything feels like an achievement, so there’s something to smile about this Independence Day.

Not surprisingly, almost all Americans also believe that an attractive smile increases a person’s sex appeal. A 2016 American Dental Association study found that 8 in 10 adults think good teeth adds value to intimacies ranging from kissing to relationships to the bedroom. Another study from 2012 found that 38 percent of Americans would rule out a second date with someone with misaligned teeth. Yikes!

“Americans supposedly prefer a beautiful smile to clear skin and are willing to go to great lengths to get one, even giving up dessert (39 percent) or vacations (37 percent),” writes journalist Dan Lee in New York Magazine.

Americans’ valuation of cosmetic dentistry goes well beyond the bedroom. The ADA study found that those with straight teeth are 38 percent more likely to be perceived as intelligent. And three‐quarters of adults feel that an unattractive smile can hurt a person’s chances for career success.

The attribution of favorable characteristics to physically attractive persons is called the “beauty is good hypothesis.” An attractive appearance, including the look of your teeth and gums, influences a range of social activities. The “body of research indicates that appearance affects social expectations not only in educational performance, but also in vocational, marital, legal, and health care endeavors,” according to the report.

The pursuit of a perfect smile is likely to remain an American cornerstone for the foreseaable future.

Kids in the United States kids get a jumpstart on orthodontic and cosmetic dental services as compared to their parents’ generation. Eighty percent of teenagers are currently in an orthodontists’ care, a two-fold increase from 20 years ago. The recommend average age of a first visit is now 7-years-old. And new treatments like Invisalign, Lumineers, and AcceleDent are making it easier than ever for Americans to design their perfect smile.

Across the country, the supply of dentists and dental clinics is keeping pace with increasing demand for dental services. And aspiring dentists should note that market trends are very much on their side. Americans and their Dentists are here to stay. Hooray for America!

Happy Fourth of July everyone!